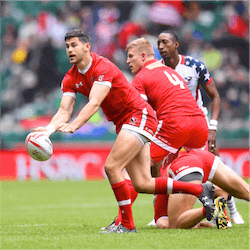 Rugby World Sevens – What to Expect at Twickenham

The HSBC world Rugby Seven series tournament is drawing to a close. With just one leg left before the final in Twickenham, there isn’t much time for the teams to claim tournament points. In the most recent leg in Singapore, Canada won their first ever tournament after beating the USA 26 points to 19 in a never seen before Northern America final.

The Canadians raced to a 19-0 lead in first half but the USA managed to score twice thanks to the efforts of Perry Baker. A last try in the dying moments of the game courtesy of Lucas Hammond sealed the win for the Canadians. The final day of the Singapore Sevens tournament turned out to be filled with shocks and upsets. Tournament leaders South Africa as well as Fiji and New Zealand were all knocked out in the quarterfinal stages of the competition.

England went on to play Australia for the bronze medal, beating them 14-12 at the National Stadium while Wales pipped Scotland 14 points to 12 to claim the Challenge Trophy. While the Springbok Sevens team missed out on the Singapore title, they did just enough to extend their overall lead in the series against their nearest rivals Fiji as well as England. The South African’s finished in 6th spot but with upsets across the board, they managed stay on track for the title.

The Blitzboks started the Singapore tournament 23 points clear of Fiji in second place. They have since extended their lead by two points after beating the Olympic champions. England, who picked up third place in Singapore move closer to Fiji and sit just two points behind and 27 points adrift of South Africa. With one leg to go, South Africa are in a commanding position to claim the overall title in Twickenham.

Unless they lose focus completely, they should do enough to hold onto their lead. Meanwhile, the battle for second place is all up for grabs. Fiji are sitting on 132 points with England close behind them on 130. New Zealand is also in the running, 20 points adrift. If New Zealand manages to claim a win in Paris, it will be a free-for-all in London.