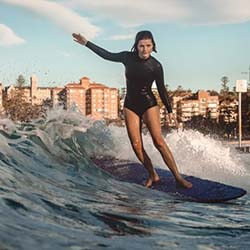 So fed up has premier surfing champion Lucy Small become with the prevailing pay inequality present in women’s sports, and specifically in a Sydney longboard competition for which she received the Curly Maljam award on Saturday, that she called out the inequality in her acceptance speech.

Small in her speech thanked the event’s sponsors for the prize money but added that her victory had been a bittersweet experience knowing that women’s surfing is clearly considered as being worth exactly half of men’s surfing. Small received an amount of NZ$1,610 in prize money, while the winner of the men’s leg of the competition walked away with double that amount.

The sportswoman pointed out during her speech that the cost of competing, travelling, and related expenses, were exactly the same for women as for men, and that perhaps “next time” round, this should be considered by the organisers of the event.

Small has in the meantime uploaded a video of her acceptance speech to her own personal social media account, while calling on comments from the public to be directed at the organisers of the event, the Curl Curl Longboarders Club.

Club secretary Phil Nicol shortly after the video went live defended the gap in prize money, saying the organisers of the competition had done nothing wrong or out of the ordinary, and that the men’s competition had been punted by the larger sum of prize money for the purpose of attracting “big names” to the sport.