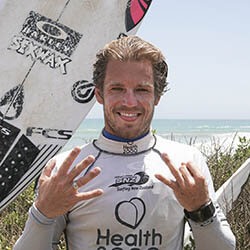 Surfers are the latest group of sportsmen and women to benefit from professional-level coaching tips to survive lockdown in the new Sky Sports Next, the NZ Sport Collective, and Stuff video series. The most recent snippet comes courtesy of Billy Stairmand.

Stairmand hit the Surfing scene with a vengeance back in 2011 when he beat Kelly Slater in a heat at the distinguished Telstra Drug Aware Pro World Surf League in Western Australia’s Margaret River. He has gone on to become a National Champion seven times since then, ranks at No. 36 in World League Qualifying Series and got provisionally qualified for the 2020 Olympic Games.

Talking about not being able to do what he loves most, Stairmand says he knows how surfers around NZ are feeling. He mentioned several injuries, commenting that he is currently coming back from hurting his knee, but is beseeching players to remain on dry land until the Level 4 Lockdown comes to an end.

Stairmand has been hard at work in rehabilitation over the last while for his knee and is very excited about getting back into the water. He says Surfing is more than just another sport to him, as is the case with most of his counterparts, and explained that it contributes hugely to not just his physical health but his mental wellbeing as well.

He is reminding everyone to be patient, however, asking that we stay the course and don’t surf until New Zealand shifts down to Level 3.