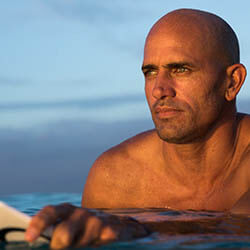 Robert Kelly Slater is a professional Surfer from the United States of America. While he has also done work as an actor, author, businessman, innovator, and model, he is best known for winning the World Surfing Championship an unprecedented 11 times. He’s regarded by many to be the greatest professional surfer of all time and is competing in New Zealand this year. Slater will be kicking off his 2020 season with the Piha Pro event scheduled for March.

Slater is currently 47-years old and holds world records for being both the youngest and the oldest World Champion in the Male Surfing category. He won his first World title when he was 20-years old, in 1992, and his last at 39-years old.

The Piha Pro will be the first time that Slater has set foot in New Zealand since 1993. It is one stop on the recently announced WSL Challenger Series and will see 100+ Surfers chasing to qualify for 2021’s elite Championship Tour.

Piha Pro Event Director Chris Simpson has said that Kelly’s attendance is a coup for the event and that having someone of this merit taking part in their first-ever event proves how well regarded the seaside village has become as a Surfing destination. Simpson said that it proves their credibility and that he’s sure that the hype around this sector of the New Zealand sporting community will be impacted.

Kelly has said he’s very excited to be returning to New Zealand and can’t wait for the March 16 to March 22 event to get started.