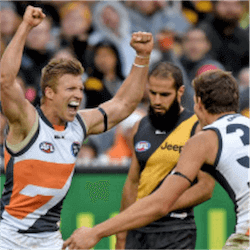 With the AFL pre-season due to start in February, New Zealand’s online sports betting fans will be turning their eyes across the Tasman for the thrills of sprawling, supercharged Aussie Rules action. The AFL 2017 Toyota Premiership season proper starts with Round 1 from Thursday, March 23 to Sunday, March 26.

All 18 teams in the tournament will play in the opening round, with byes only starting in Round 9. Thursday and Friday nights are prime-time viewing, so those slots on the match schedule are always coveted.

Top viewership draw-cards the Western Bulldogs and Sydney Swans, respectively the Grand Final champions and runners-up in the 2016 Premiership, share a wealth of these slots between them. The Dogs will play seven Friday night games and the Swans eight, while the Swans get two Thursday night encounters and the Dogs one.

Opening Games that Are Certain to Spark

The opening game of the AFL 2017 Toyota Premiership, between the Carlton Blues and the Richmond Tigers at the MCG on Thursday, March 23, ought to be a humdinger. The two Melbourne sides are historic rivals, so we can expect a packed MCG and flat-out footie. On Friday night, the MCG ought to be chock-a-block again, for another derby between defending champs the Bulldogs and the Collingwood Magpies, the NFL club with the biggest fan base in Australia.

New Zealand punters will also want to catch three matches on Saturday night, March 25. The MCG is again a safe bet for intense Melbourne rivalry, with Hawthorn Hawks stars like Jaeger O’Meara and Tom Mitchell facing off against the Essendon Bombers’ Cale Hooker, Jobe Watson and other stalwarts, assuming they are all fit.

The Carrara, Queensland match at Metricon Stadium will also be worth a punt on Saturday night, with the Gold Coast Suns/Brisbane Lions contestation spiced up by the defection of Pearce Hanley from the Lions to the Suns at the end of the 2016 season. The Saturday afternoon contest punters may want to consider, as a curiosity if nothing else, is the Etihad Stadium match between St Kilda and the Melbourne Demons. The Saints have their last won 14 encounters on the trot: can the Demons finally break the curse?