AFL heads into Round 18 weekend 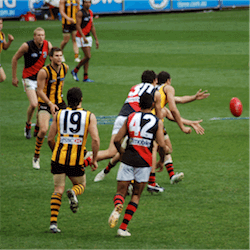 We are looking towards another great weekend of AFL action, with plenty of games to keep punters happy.

Geelong has dominated Adelaide since 2013. Geelong has won 6 of their last 7 matches and is the definite favourite for this meeting.

The Crows are looking to break a streak of 5 lost games against Geelong and may pull out all the stops in front of a sure to be packed Adelaide Oval.

Despite a great win over St Kilda last week, Essendon has always had trouble with consistency that will place their position as favourites for this game in question.

If North Melbourne can focus on neutralising Essendon’s kicking game, they may be able to pull off a surprise upset.

After losing 2 of their last three games and now facing Port Adelaide who has been in top form recently, Melbourne are in trouble.

The Melbourne side are also dealing with a large percentage of injured players putting them in an even more precarious position.

Inefficiency in their forward could hurt the Bulldogs in this game, but it doesn’t change the fact that the Suns have lost their last 3 encounters with the Bulldogs.

Their consistent tackling will neutralise any advantage the Gold Coast can muster.

After a loss to Essendon last Friday and a record of no wins against Sydney in five years, St Kilda are not expected to walk away from this encounter intact.

The Swans will be using their goal accuracy to claim the win here.

This is a tight match between two teams competing for a top 8 position.

Fremantle is the favourite to win by 6 to 8 points.

The Giants have not won a game in 3 weeks, which may put them at a mental disadvantage.

However than can only happen if Richmond can turn their inside 50 game into scoring opportunities, which has yet to be demonstrated.

Collingwood have lost 6 of their past 7 games at Etihad Stadium.

The West Coast have simply had a stronger year and are set to take the victory here.

Possibly the most evenly matched game this week, the Lions look to be the favourite here as long as they can improve their patchy defence.

The players to look out for in this match will be the Lion’s Dayne Zorko.

You can get your bets in online on any of these AFL games at Sportsbet, and you’ll find great odds and a wide variety of markets at your fingertips.