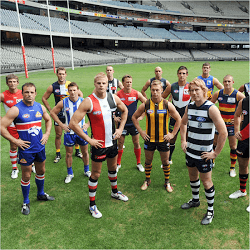 Australian Rules Football, or footie to millions of fans, is far and away Australia’s top spectator sport, both in terms of stadium gates and television audiences. As a result, the Australian Football League rakes in billions from the game; and players are starting to think that more of that revenue should be coming to them.

It’s hard to argue with the logic of the AFL Players Association (AFLPA). At a meeting in Torquay last week for players from all clubs, to which AFL CEO Gillon McLachlan had been invited, AFLPA president Matthew Pavlich pointed out the sacrifices and physical stress that players put themselves through for the game, adding that the public didn’t understand how tough playing professional AFL can be.

Compared to the total revenues the game rakes in, Pavlich said, the increase players were requesting was actually only a small percentage of profits. However, he added, a bigger piece of the pie would ensure player loyalty and commitment, as it would demonstrate the AFL’s sincere intention to build the game in partnership with players.

Is Strike Action a Possibility?

AFL CEO McLachlan’s non-appearance at the Torquay meeting caused anger and disappointment among some players, even though Andrew Dillon and Ray Gunston, both members of the AFL executive, attended in his place. Star Geelong player Patrick Dangerfield, the winner of the 2016 Brownlow medal, said he felt players were expecting a little more respect than they got from the AFL, despite Ray Gunston calling the discussions “valuable”.

If the AFL executive remains obdurate, and players stick to their guns, the prospect of a strike looms. The AFLPA insists that industrial action would be an absolute last resort, and that there is still a long negotiation process ahead, but various players are not necessarily as patient.

Dangerfield is one of them; he says he loves playing for the fans, but he is prepared to withhold his labour if there is no other way to get the deal done. It remains to be seen if the AFL will blink, but footie fans may need to prepare themselves for some disappointment next year.