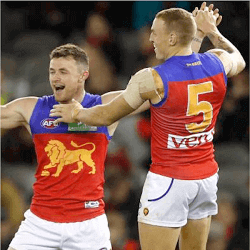 AFL fans and teams alike had many great moments during the 2016 footie season. For the fans, 2016 AFL highlights included cheaper finals, at only $35 a pop for entry-level seating, and Sunday Fundays that saw the kids getting in free in Queensland, NSW and Victoria every Sunday.

The Western Bulldogs also started a trend of really funny banners, the work of comedian Danny McGinlay. Inspired by his weekly hilarity, other clubs were also spurred to up their game in the crowd-amusement stakes. The banner banter just got better: but there was plenty of 2016 AFL highlights on the field too.

Goal of the Year? Safe Betts

Not many are going to argue with our selection of Adelaide’s Eddie Betts for the most exhilarating goal of the season, against Greater Western Sydney at the Adelaide Oval. With Nick Haynes contesting possession, Betts kept the ball from going out of bounds, and managed to run around Haynes while keeping the ball alive. Then he powered his way through Adam Tomlinson’s tackle and cut across to deliver a perfect 35-metre kick; a truly amazing effort.

Off the field, Betts showed just as much class after the infamous incident in which a woman threw a banana at him at the Adelaide Oval. His response to her apology was gracious and forgiving, while at the same time making it clear that racism in AFL stadiums has to go.

Paddy Dangerfield’s first season at Geelong must have dismayed Adelaide fans as much as it delighted headline writers. The 26-year-old had a blinder; delivering a career-best 43 disposals against Hawthorn in his first match. He broke that record again in Round 12, with 48 against North Melbourne. His stats for the rest of the season are equally impressive: 31 touches with 16 of them contested, seven clearances, eight inside 50s, and five tackles per game. Add the 23 goals booted, and the Brownlow Medal win was hardly a surprise.

Mark of the Year is Inseparable

Essendon’s Joe Daniher took a spectacular mark literally off the shoulders of St Kilda’s Sam Gilbert in Round 16, at a ridiculous height. But Majak Daw of North Melbourne also has to be in contention if we’re talking the top mark in the 2016 AFL highlights. He sailed over Collingwood’s Jonathon Marsh to work a similar aerial miracle in Round 18. Good luck picking a winner from those two; we have to go with a tie.