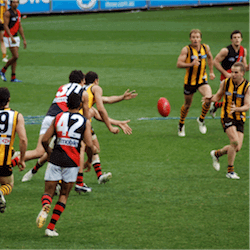 Let’s look at the AFL matches set to take place this weekend.

With their consistent performance in their last 4 games, St Kilda is the favourites in this match.

If they can work on their conversions they are a shoe in. Jake Carlisle will be a key figure in the match against his former team mates.

As one of the highest scoring sides this season, the Cats are a favourite in this matchup.

They also have a proven record against Hawthorne, having won their last 3 face-offs.

With 5 straight losses coming into this match, Melbourne’s chances are not looking good.

Adelaide on the other hand has shown their critics they mean business after a hard won victory against the West Coast last week. They will have the home ground advantage in this match.

This is the hardest match to predict this week thanks to the unpredictable form of these two sides. Statistically the game will go to the Gold Coast.

Judging Collingwood’s form against Essendon last week, it doesn’t seem they have their heart in the game this season.

The Swans are the favourite in this match but coming off three consecutive wins, the Giants may have enough momentum to take them all the way.

Without Nathan Jones and Jack Viney, Melbourne may be in for a rough ride.

The Crows have been in great form, coming off a commanding victory against the Bulldogs last week. Adelaide is the favourite for this match.

Richmond faced the Lions in round 4 and had the team on the ropes by the first half.

They have won the last 10 matches they had against the Lions who have been performing inconsistently with their new coach.

Carlton is the pick for this matchup. The Bulldogs have so far only won 2 of their past 8 games.

Without Patrick Cripps, Carlton’s midfield will be weaker which may be the Bulldogs only salvation.

The Eagles, with the help of their star player Josh Kennedy, look set to take this match.

Fremantle is one of the lowest scoring sides this season but their mid field strength could be the winning ticket if they can use this to gain an advantage.

Bet on these and other games online at Sportsbet and get great odds every time.