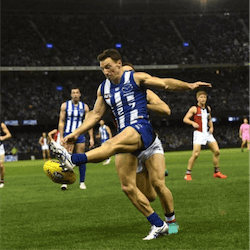 Round 16 Of The AFL Tournament

This weekend sees some very exciting clashes for the 16th round of the AFL tournament. You can get your bets in online at Crownbet so that you don’t miss out on any of the excitement.

Friday night’s clash between Adelaide and the Bulldogs is a foregone conclusion for many. The Bulldogs have had some of the worst performances this season.

Their forward line will have to somehow contend with the wave of Adelaide’s defenders and wingmen. If they cannot control the centre field, they will not win.

The Giants are the favourite for this game on Saturday after claiming victories in 10 of their 14 games.

Despite the Hawks having made a comeback in the last two weeks, it may not be enough to take down the ladder leaders.

Also meeting Saturday, Collingwood and Essendon will both have something to prove after they have suffered some demoralising defeats in their last games.

With the two teams having a pretty similar win loss ratio of 5-9 and 6-8 respectively it is a close match to call, but after Collingwood were defeated by Essendon at the ANZAC Day clash earlier this year, the money seems to be on Essendon.

Another Saturday match, Sydney v Gold Coast does not feature the variables of the other games.

The Gold Coast has never beaten Sydney who has won 7 of their last 8 games. The Swans will more than likely trounce the Gold Coast once again.

Geelong comes off a draw against ladder leader, the Giants. If the Lions can bring the fire they had against Essendon, this may be a close match. If not, the game will go to Geelong.

If St Kilda can manage to break Richmond’s defence, they may stand a chance.

Both teams have shown courage in their recent matches but St Kilda has the advantage of coming off three straight wins.

Possibly the most equal matchup of the weekend, both teams have lost star players and both teams come off losing streaks.

Statistically the defensive power belongs to Melbourne and with Fremantle’s poor away performance; there may be a chance for Melbourne to come out on top.

This match sees a decimated North Melbourne attempting to keep things together. The team is playing without co-captains Jack Viney, Nathan Jones and Christian Salem and Jack Watts.

That said, Carlton has had worrying performance in their matches heading up to this clash and they may not be able to last against Melbourne

Following a sorry performance this season, Port Adelaide will need to pull off a surprising victory on Sunday against the West Coast.

Port Adelaide is already feeling the pressure with fans and critics labelling them “The Pretenders”.