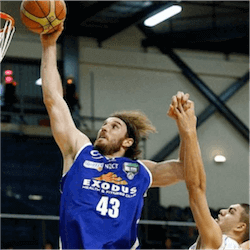 A Missed Chance for the Hawks

The Bay Hawks will be kicking themselves after they missed a golden opportunity to jump straight into playoff contention in the National Basketball League. The Hawks gave away a healthy 19-points lead to lose by 86-81 to the Southland Sharks. The Hawks went into the ill-fated match being the only team who could challenge any of the current top for teams with an action record of 3-6.

While the SuperCity Rangers have a better record of 5-5, the Hawks will host the Rangers at home on the weekend, giving them a chance to close the gap a bit and possibly hold the playoff tiebreaker. Beating the Sharks would have been a useful boost to the team, putting them right into the mix after a sluggish start to the NBL season. The Hawks won their first two games under the guidance of interim coach Benny Hills.

They continued their form in the early stages of the game against the Sharks who took longer than usual to find their rhythm. The game was a messy affair with plenty of sloppy contests and poor executions from both sides. While the Sharks were to blame for some poor shooting, they were also a bit unlucky. They had several open three pointers that just didn’t drop giving them a 4-19 record for the night from beyond the arc.

The Sharks managed to stay in contention thanks to the efforts of Duane Balily who came off the bench to score 10 points in just 14 minutes along with significant contributions from Derone Raukawa. Derone managed to continue his season with a solid 14 points, 3 rebounds and 4 assists. When the fourth quarter got underway, the Sharks stepped up their game with Nick Kay racking up 16 points and 9 rebounds. Alex Pledger kept up the offensive with a further 12 points and 9 rebounds.

The fourth quarter went the way of the Sharks as they managed to cut their 10-point deficit down to 3 early on. The Hawks were not as successful in the final period, racking up a total of 9 points for the rest of the game. The Sharks were able to slowly edge in front of the Hawks and three points down with 18 seconds left on the clock. Luckily for the Sharks, the ball ended up in the hands of Amir Williams who scored a brilliant three, sealing the win who stay in second place with 8-3 record.