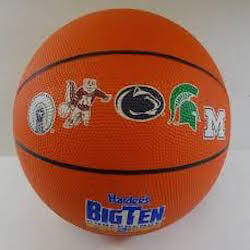 The Big Ten Is Around The Corner

Running from the 28th of February until the 4th of March, the Big Ten Basketball Tournament will be held at the legendry Madison Square Garden this year. This event is one of the biggest of the NCAA Division 1 calendar as the winning team will get automatic entry into the NCAA Tournament.

This would also mark only the second time that the Big Ten was held away from its Midwest roots, with last year’s tournament being held at the Verizon Centre in Washington. Madison Square Garden is certainly a huge upgrade and should make for a spectacular evening of premium college basketball.

There are 14 Big Ten teams that will be taking part in this event and their seeds will be based on their conference record so far, which generally reflect the overall standings to some degree quite accurately.

It’s also notable that in the event of a tie breaker scenario where two teams have an identical conference record, the same tie breaker rules used last year will apply, which most fans and teams have been quite supportive of.

Teams To Look Out For

Michigan is the favourite this year, still under the leadership of John Beilein. Their performance has been a bit wonky in the NCAA regardless of where they are in the seed, but their performance so far has been excellent. They crushed Penn State last week which helped the Wolverines claim a no 5 seed slot. Michigan is also the overall conference lead with an incredible 27/3 win/loss ratio.

On the 1st of March when the Big Ten kicks into high gear, Maryland will be the opening match team facing off against Wisconsin. Wisconsin just managed to beat Northwestern with a close 70/64 nailing the Big Ten no 9 seed, with Maryland walking away with the no 8 spot.

This year’s Big Ten looks set to be another scorcher just like last year. Again, the premium venue really adds a lot of flavour to the event, making it a must watch. Next year however the organisers will be challenged to top themselves.