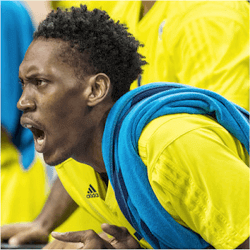 The New Zealand SkyCity Breakers have officially confirmed that their latest import is no other than American Paul Carter. 29-year-old Carter will be officially introduced to the media in Auckland after he arrives on New Zealand soil on Boxing Day.

The American basketball player has been brought in as a replacement for Corey Webster, who has been benched due to an injury. Carter, who stands at 203cm tall (six foot, eight inches) will play an important role in the Breakers team, as along with Webster being out of the game, so too is Tom Abercrombie, who has a broken hand.

The Breakers are hoping to get Carter onto the court as soon as possible, but he has said he may need a little time to acclimatise to his new surroundings. He went on to say that the turn around time was incredibly fast and that up until recently, playing in New Zealand wasn’t even on his radar.

It was Carter’s good friend Akil Mitchell who caught the Americans attention, as they played together in 2015 and the Kiwi kept asking Carter when he’d come to New Zealand. With injuries plaguing the Breakers, an opportunity arose and Akil suggested Carter come over and play, and it just happened to all pan out. Carter said he wasn’t sure what to expect from New Zealand, but as a huge Lord of the Rings fan he was incredibly excited about paying a visit.

Paul Henare, the Breakers coach couldn’t be more thrilled at the way things worked out and said that he was extremely pleased to have secured a player that has Carters level of experience. He added that it was a difficult time to find new recruits and the speed at which the acquisition took place was almost unheard of, but very welcome.

Henare said that the Breakers were relying on Carter’s experience, as he had played all over the world and managed to slot in seamlessly wherever he went. Carter’s ability to express himself and utilise his extensive skill set would be invaluable to the Breakers, and Henare knows that he will be able to fit into the club’s standards and meet all expectations.

Carter has a wealth of experience and the American player has played professionally in France, spent 2 years in the D-League and was on a short-term injury contract in Germany. Once again, he’ll stand in as an injury replacement when playing for the Breakers and it’s hoped that he’ll bring back some of the defensive power the team has lost in recent weeks.