The Breakers will be replacing Corey Webster for the NBL 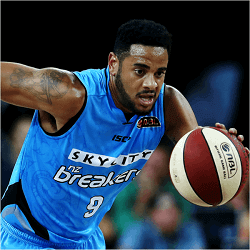 The Breakers are Looking to Replace Corey Webster

Shooting guard for the Breakers basketball team, Corey Webster, has been trying to deal with various injuries all through his season, and two weeks after he was arrested on charges of assault, he has now been sidelined indefinitely –although the team says that the timing is totally coincidental.

Repeated injuries seem to have been too much for Webster to handle, and he has been shut down for possibly the rest of the Australian National Basketball League season, left in relative peace to start getting a handle on both his health issues and upcoming court proceedings while his club seeks a replacement for him in the interim.

Webster has been unsettled by back and hip issues pre-season, but although his minutes have stayed consistent, his form has not managed to quite reach the highs of previous seasons.

The 28-year old player got suspended after a game for “breaching club values” after a night out on the town that ended up in his being arrested. Webster is set to appear in court on the 20th of December to face the assault charges, but has been quoted as saying he intends to defend himself against these “vigorously”.

The Breakers have provided Webster with their full support since the incident occurred, but the player’s health problems left coach Henare no choice but to remove him from the line-up. Henare was quoted as saying that the decision was a result of conversations with coaches; talks with the board; and trying to decide what the best way forward would be with Webster, bearing in mind that the overall good of the team would need to play just as important a role in the decision-making process. Henare said that the difficult decision was the result of putting Webster’s physical health first, and allowing him to get his body back up to speed.

Henare went on to say that Webster is a “player… a hooper”, and that his desire to play would override his pain. Although Webster is not in agreement with the club’s decision, he has been said to have accepted it, and coach Henare put this forward as further proof of Webster’s calibre as a player, stating that his acquiescence of the pronouncement was appreciated by the club. He stated that the final decision had been made by him, in his position as head coach, and that it had taken place at board-level as well.