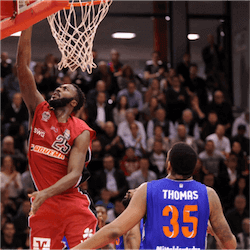 It was barely a week and a half ago that Nanterre 92 were crowned the FIBA Europe Cup champions and it has already been confirmed that British player Myles Hesson will be signing with the squad.

Hesson was injured in February with a fractured Tibia which placed his role in the sport in jeopardy; he missed the team’s FIBA cup final and his season with the Gravelines as a result of the injury.

If his recovery goes to schedule, he will be representing his country at the Eurobasket tournament with team Great Britain before joining Nanterre in France.

As a Pro-A player, Hesson averaged an impressive 12.4 points with 5.1 rebounds at each game, along with always bringing a positive attitude and determination.

The French team, Nanterre 92 is the current champions of the FIBA league after a close final against Élan Chalon ending in a score of 79 to 82.

The World Cup victory for Nanterre 92 was at the time their second cup in as many weeks. Prior to defeating Élan Chalon in the FIBA finals, they had also hoisted the French Cup. This was also the second time that the team had won a European Cup after they took home the EuroChallenge in 2015.

It is no surprise then to see why Hesson has signed with the French team. They have been performing better and better each season and with the inclusion of a solid player like Hesson, their fortunes are sure to keep going ever upwards.

In their previous meeting, Nanterre 92 and Élan Chalon played a draw game ending on 58-58. In the finals match, Nanterre had the home ground advantage and the fans were always keen to remind them how much support they would be having behind them that night.

Fans had a nail biting second half as Élan started showing their grit to aggressively start taking the lead. Sadly Élan Charon could not sustain their fourth quarter assault and soon fell to the technical work of Nanterre.

Axel Bouteille from Élan Charon took the final overtime shot of the game but it was not meant to be. The missed shot would not be enough to snatch victory from the jaws of defeat.

Hesson is looking forward to his coming tenure at the Nanterre camp. Until then he is only focussing on his recovery and his upcoming showing for team Great Britain.