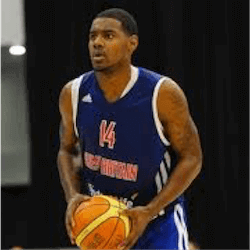 Johnson Lined Up For FIBA Eurobasket

Since a series of humiliating defeats, the Great Britain FIBA team have been attempting to bolster their ranks with more talented and experienced players in order to stand a fighting chance at the FIBA Eurobasket 2017.

In their last group of friendly matches the team has suffered some crushing losses, notably against the dominating Greek side that defeated Great Britain twice in quick succession. Now the team has netted the professional basketball player Kyle Johnson to join the team in their FIBA Eurobasket showing.

Kyle Johnson is a player for London Lightning as well as the National Basketball League of Canada. Jonson’s strength is in perimeter shots which will help round out the current Great Britain team composition and give them a bit more breathing room if they can increase the scope of their attack on the court.

Johnson has a legacy with the British side, having played for the Great Britain Futures team when he was an aspiring Basketball player in 2011.This lead to him heading to the Eurobasket finals in Lithuania. He eventually went on to represent Great Britain in the 2012 Olympics so he definitely has the pedigree to be part of the British side.

Johnson currently averages about 14 points a game and has a 3-point shot percentage of 38%. His highest score was a 51 achieved against Moncton.

In preparation Johnson is taking part on a preparatory tournament, working on team strategy and getting a feel for his teammates. They then will be heading off to the 15 team international FIBA event which kicks off on Thursday and will run until the middle of September.

The British team will be grouped with Latvia, Russia, Serbia, Turkey and Belgium. Russia will be a major threat in this group as one of the stronger teams in the tournament.

Meanwhile there has been some backlash between the NBA and FIBA after it was announced that Giannis Antetokounmpo will not be playing for Greece, his home side at the FINBA Eurobasket. The player is under contract with the Milwaukee Bucks and he has cited a knee injury that leaves him unable to compete at the tournament.

Antetokounmpo played every Greek exhibition game except one and now the Greek basketball federation is calling foul on the news.

This week it was reported that Takis Tsagronis, general secretary of the Greek Basketball Federation arranged a magnetic resonance scan of Antetokounmpo’s leg and there was no issue detected.

Antetokounmpo and NBA officials claim that he has a knee injury that prevents him from playing and it was recommended that he be sent back to Milwaukee for further assessment, rehab and training. Antetokounmpo has only missed a single game in his 4 year career with the NBA, earning him “Most Improved Player” and “All Star “ accolades.