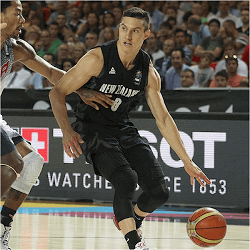 Bloodlines are Strong in the Junior Tall Blacks, or JTB, Team

The Junior Tall Blacks, or JTB, team has now been named for Fiji’s FIBA Oceania Championships, and this team is rumoured to be one of the strongest junior basketball squads yet to be seen. The Head Coach, Daryl Cartwright, has been quoted as saying that each one of his 12 players have the level of confidence necessary to step and lead in a context of more intense competition levels.

Cartwright has stated that each member of the JBL team is the leader in their respective school or team, and is the athlete in each squad most likely to make the big play and carry their teams to victory almost every time they step out onto the court. This fact means that the JBL team has the level of confidence required for the FIBA Oceania Championships, and Coach Cartwright is confident that the team has a genuine depth, with each individual player having the ability to be a starter player.

The JBL team as it currently stands already has a number of players well known inside the basketball community for a lot more than their abilities on the court. The pedigree of two of the newer faces is especially notable: Flynn and Tobias Cameron are the sons of Tall Black legend and Assistant Coach Pero Cameron.

Both players reside on the Gold Coast, and, although eligible to compete on behalf of Australia as well, have elected to represent New Zealand instead.

Don Fotu is another noteworthy, and familiar, name, being the younger brother of Isaac Fotu, the Zaragoza and Tall Black player. The younger Fotu was additionally selected for Basketball without Borders’ Asia Camp, and joins JTB players Quinn Clinton; Sam Waardenburg; and Taane Samuel. Clinton has also been named MVP for the camp’s All Star game, and Waardenburg took the title of MVP for the camp complete.

In fact, Waardenburg has hit the headlines a number of times, thanks to his taking part in the FIBA 3×3 Under-Eighteen World Championships; being selected for the high-status NIKE All Asia Camp; attending the National Basketball Association, or NBA, Players Association Top 100 Camp; attending Adidas’ Nations Tournament; and signing up for Miami University enrolment on a Full Division One Scholarship. His Junior Tall Black teammate Takiula Fahrensohn has also recently signed to Division 1, albeit with the University of Portland, not the U of M.