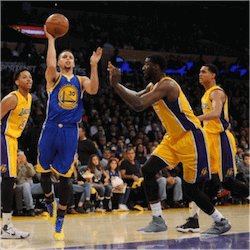 Caleb Swanigan was the Star of the Show

Rookie heavyweight, Caleb Swanigan, who was chosen to become part of the All-NBA Summer League 1st Team, finished the game with a total of 25 points, 12 rebounds, and 7 assists, and Jake Layman managed to add 21 points and 7 rebounds for the Portland Trail Blazers.

Kyle Kuzma packed in 30 points and 10 rebounds, and Vander Blue recorded 20 points, 6 assists, and 5 rebounds for the Los Angeles Lakers, who managed to win this game without their Summer League Most Valuable Player, Lonzo Ball, who was out with a strain to his right calf.

Portland Worked Hard to Get to the Game

The Trail Blazers progressed to the Championship thanks to a victory of 87 – 82 against the Memphis Grizzlies in Sunday’s semi-finals. After going 1 – 2 in the opening round, the Blazers beat not only the Chicago Bulls, but the top-seeded Toronto Raptors, the San Antonio Spurs, and the Memphis Grizzlies in order to reach the game against the Lakers.

The Blazers managed all this even though the team had to do without 2 of the 4 players that are also on their NBA roster: Zach Collins, out with a right quad contusion, and 3rd year guard Pat Connaughton, unable to play thanks to a strain to his left hamstring. Both players were unable to play in the tournament round thanks to their injuries.

Mr Double Double Picked Up a First on Monday

Caleb Swanigan has been named to the All-NBA Summer League 1st Team, which has him joining the Los Angeles Lakers’ Lonzo Ball, the Dallas Mavericks’ Dennis Smith Jr., the Phoenix Suns’ Josh Jackson’ and the Atlanta Hawks’ John Collins. Lonzo Ball was named Most Valuable Player.

As the No. 26 overall pick of the NBA draft of 2017, Swanigan has been the Portland Trail Blazers’ most reliable and excellent performer at the Las Vegas Summer League. He has managed to record 4 double-doubles in 7 games, and was key in his team making it through to the Championship game.