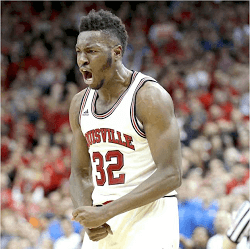 On Boxing Day the Houston Rockets squared off against the Phoenix Suns. The Rockets absolutely decimated the Suns 131 to 115, but that is not what the most memorable moment of the night was.

What stuck in most people’s mind was the appearance of rookie Chinanu Onuaku and his attention grabbing free throws that helped clinch the game for the Rockets.

Onuaku left the audience stunned as he hit two free throws using an underarm style of throw. Underarm throwing is also known as “Granny style” throwing. It is a perfectly legal moved that is generally frowned upon simply because it is seen as a beginner or kids move.

A Tried and Tested Technique

Chinanu flies in the face of a standard set since Rick Barry, a NBA hall of famer last used the move in professional play in the 80’s. The underarm technique is considered to be a better way to take free throws, especially for taller athletes as it provides more accuracy and more control.

It significantly improves almost all players’ free throw statistics but the image of the move has prevented most NBA players from integrating it into their play styles.

Even Wilt Chamberlain, one of the best former players in the NBA stated that the move improved his game stats but he never used it in official matches as he felt throwing underarm is throwing “like a sissy”.

Fortunately for the Rockets and for the fans, the 6 foot 9 Onuaku ignored this preconceived notion and used the underarm throw to sink two free throws for his team.

Onuaku followed the coach’s advice and his free throw average jumped up to 58.9% and the 20 year old player has never looked back.

He was quoted in Sports Illustrated saying that he is well aware of the stigma attached to throwing “granny style” as it is derisively called but he can easily brush off the moniker as long as it improves his game.

Players and fans alike should rally behind Onuaku and have this perception of the underarm throw thrown out.

Players should always be focusing on bettering their performance for the team and for their fans. If more players approached the game like Onuaku, surely another golden age of NBA action will be upon us.