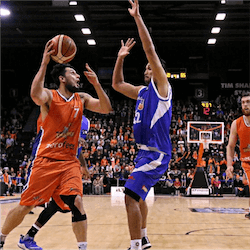 Another dominant display on the weekend has kept the Wellington Saints on track for a perfect National Basketball League season. The NBL defending champions now have an impressive record of 14-0 with just four games left in the regular season before hitting the final four in Tauranga. The Saints are set to come up against the Nelson Giants who sit at 4-10 as well as the Bay Hawks on 3-10, neither of which should offer any real challenge.

The Saints toughest playoff would be the Supercity Rangers who are currently sitting at third with a possibility of jumping into second spot. For the Saints though, their biggest test came this past Friday when they faced off against the Southland Sharks. The Sharks currently hold the second spot on the ladder and went into the game on a six-match winning streak.

The Saints were also without Tai Wesley, a point the Sharks capitalised on early in the game. The Sharks were eager to take advantage of the missing Wesley and claimed a 13-0 lead. This was until MVP frontrunner, Corey Webster got going. He boosted the Saints with a massive 37 points and 10 assists to give the Saints a third quarter lead of 32-13. Shea Ili also added a significant contribution with a career high of 30 points taking the saints a 109-94 win.

The Saints then backed up their Sharks win by thrashing the Taranaki Mountainairs 96-63 on Sunday. The Sharks meanwhile suffered one of their worst defeats against the Supercity Rangers, going down 112-82. The win puts the Rangers at a record of 8-5, just behind the Sharks on 9-5. As it stands, the two will probably be meeting in the semi-finals with the Canterbury Rams needing something special to jump out of fourth position.

The Rams got a welcome boost by McKenzie Moore who recorded the first triple double for the NBL season in their win over the Bay Haws. Moore racked up a total of 27 points with 11 rebounds and 11 assists as the Rams managed to end the Hawks hopes of reaching the playoffs. Meanwhile the Giants, Mountainiairs and Hawks will be left to battle it out to avoid picking up the wooden spoon. The Moutnainiers are sitting at the bottom of the log at the moment having lost their previous 10 games at with a score total of 3-11.