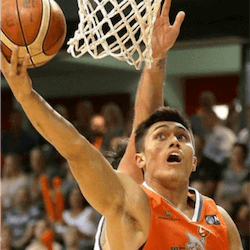 The Southland Sharks have won their opening NBL season game against the Nelson Giants. The Sharks thrashed the Giants 96 points to 58, laying down a marker for the rest of the season. In the NBL pre-season, the Sharks were considered to be the 2017 title contenders while the Giants were tipped to take the wooden spoon.

If punters and basketball fans had any doubt about such predictions, they were quickly put to bed when the Sharks decimated the Giants at the ILT stadium in Invercargill. For the Giants, the game was pretty much over by the first quarter. After scoring just a single field goal, the team slumped to a 27-9 hole that they just could not dig themselves out of.

It was Finn Delany who had all of the nine points for the Giants as the team went from 1-16 from the field. The Giants struggled to deal with the Sharks huge frontline. With James Hunter (13/11), Alex Pledger (19/9) and Nick Kay (8/6) all sweeping the glass, the Giants could not keep the team in check. The battle of the rebounds also went the way of the Sharks with 53-29.

Washington Out of His Depth

Curtis Washington, the Giant’s centre was out of his depth and completely unable to hold off the tide. He did better than his fellow import though. Joe Sclocum, the Division II Alaskan import provided nothing of value shooting a disappointing 0/7. Washington officially has Guam residency, which technically makes him a local. This means that the giants can bring in another import if they have the budget. If they want to stand a chance of becoming a major contender, they might have to conder the option sooner rather than later.

For his part, Delany put on a good show but had little space to work with. He finished up with 19 points shooting 5/17. Dion Prewster added nothing with 0/6 while Sam shot 1/6 adding just five points to the board. From the bench, it was Tom ingham and Ali Granger who added another 9 points to give the Giants a bit of life.