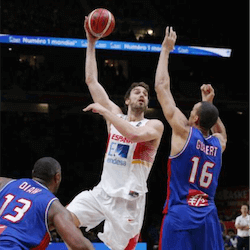 Slovenia is revving up to make yet another powerful showing ahead of this year’s FIBA Euro Basket. The decorated team this year lists Goran Dragic and Luka Doncic as potential players. Goran is having a successful career with the NBA team, the Miami Heat. His skill and experience is balanced out by the young talent of Luka Doncic.

Slovenia this week released their preliminary 29 player roster and it has raised many eyebrows due to the strong players collected in the team this season.

A Dynamic And Powerful Squad

The team composition hints at a versatile team ready to take on most challenges that the other FIBA teams will be throwing their way.

The Slovenian team will however miss the presence of Zoran Dragic who is out of the season for now due to an injury.

The coach, Igor Kokoskov, veteran of European basketball, said that his main criteria for the team selection were the individual’s recent club performances as well as their career consistency.

The current team has not changed much from the team that punched through the 2017 The Euro Basket qualifiers.

New additions this season come in the form of the experienced Cedevita Zagreb, Mirza Bogic, Montakit Fuenlabrada and Luka Rupnik.

Many players still have club obligations to fulfil before thy return to training for the Euro Basket. Coach Kokoskov said that he hopes the players recover well both physically and mentally in their break because they will be working hard once training starts.

Kokoskov along with fellow coach, legendary player Jaka Lakovic will be whittling down the current 29 man roster and present the final team to the FIBA Euro Basket committee.

The team drew Group A matches so they will be first up travelling to Finland where they will be up against some string completion. Their fellow group A teams feature France, Greece, Iceland, Poland and the host team, Finland.

Meanwhile Georgia have presented a very competitive 17 man preliminary squad. They will again be lead by veteran Zaza Pachulia this year.

They may not have the international players of Slovenia, but Viktor Sanikidze, Tornike Shengelia and Giorgi Shermadini can hold their own against the best in the world, not to mention the ace up their sleeve, deadly accurate scorer, Michael Dixon Jr.

For now it seems that Slovenia has one of the most competitive teams in the Euro Basket tournament. Only time will tell however.