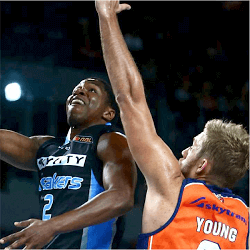 The Breakers Have Dropped Their Second Straight

The scorecard at the moment reads Taipans 91, Breakers 80. In a competition as tight as the 2016 Australian National Basketball League is this year, the Breakers can simply not afford to be as loose as they are in possession. For the second straight basketball game, turnovers doomed Henare’s side to an ugly defeat last night, with their best efforts seeing them fall short in an 11-point loss to the Taipans.

One short week after handing over possession an incredible 22 times in the hiding they received against the Hawks, the Breakers proved to be just as careless with their time in Cairns: they ceded 20 turnovers, and allowed the opposition to profit from these miscues to the dismaying tune of a total of 20 points.

Disappointingly, it was the Breakers’ most vital players who were the sloppiest, with Corey Webster and Kirk Penney managing to err on ten occasions, and prevent the visiting team’s offence players from ever being able to find their top form.

The setback has resulted in the Breakers dropping to 6 – 6 for this season –the same amount of defeats as Adelaide, currently in last place, and only one more than the top-ranked Sydney. It has also resulted in the continuance of the striking current trend of equality in the Australian National Basketball League: Cairns’ triumph was the fifth game in a row in which the higher-ranked team was unable to emerge victorious over the lower-ranked squad.

The parity of the teams has led to an enormous boost in the health of the competition as a whole, but this is sadly not the case for the Breakers coach. Henare has both played and coached in Breakers teams that are built on the power of a good defence and successful rebounds, and this first abortive effort against the Taipans must have been especially difficult for him to swallow.

Arriving on court with the second-to-worst defence in the entire league, the Breakers gave the appearance of being absolutely intent on giving the home side as much help as they needed in the first two quarters of the game.

The Breakers were out-rebounded 20 – 12 in the first half of the game, and managed to cede a total of six offensive boards. This allowed for far too many second-chance points, and let Cairns lead by a total of 17.