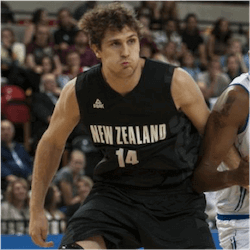 Despite a last-second defeat by South Korea, the Tall Blacks have finished top of their log at the Asia Cup. Due to the curious way in which the pool-play was set up, the New Zealand team needed a win or to lose by less than two points to book their spot in the quarterfinals. As it turns out, they did lose to South Korea by 1 point, leaving coach Paul Henare feeling vindicated after a serious bout of strategizing in the final minutes of the game.

The fact that New Zealand were able to close the gap was a testament to the team and the coach. At one point the Tall Blacks were down 41-26 with halftime approaching. New Zealand were able to turn things around though, with Fin Delany putting in a massive third-quarter performance. In the final seconds of the game, South Korea had the ball and the score was 75 apiece.

Coach Paul Henare was all too aware that a three-pointer would knock them off their top spot, he ordered his team to intentionally foul. With South Korea hitting one of two, the message from Henare was that it had to be their last shot. It might have been that South Korea were unaware of their circumstances as they allowed She Ili to run the clock before attempting a buzzer-beater.

Ultimately it fell short, but the 1-point deficit was enough to get the team through to the quarterfinals. While they would have liked to have won the game, Strategy played just as much of a role in the game as skill. The Tall Blacks now have to wait for the winner of the preliminary playoff game. This would most likely be Iraq or Jordan in the quarterfinal instead of a sudden death game against Japan.

For much of the game, it seemed New Zealand’s Asia Cup campaign had come to an end. South Korea were looking dominant throughout the first half. Their offensive skills and the way they used multiple shooters stumped the Tall Blacks. At the same time, their sporadic zone usage meant they could take advantage of New Zealand’s lack of three-pointers.

An 11-point deficit at half time and running into a number of fouls, the Tall Blacks needed a way out. Thankfully Delany stepped up to the plate. Celebrating his 22nd Birthday, he orchestrated a 27-12 third quarter and made a team-high 14 points with 8 rebounds. Delany was helped by Sam Timmins who shot 12 points with 6 rebounds and Derone Raukawa who racked up 14 points with 5 rebounds and 3 assists.