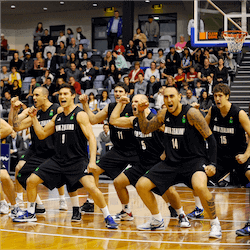 The New Zealand men’s basketball team has been narrowed down to a youthful 12-man squad for the upcoming Asia Cup in Lebanon. The recent training camp saw 15 trialists whittled down to the top 12 with Paul Henare and his team focusing in on whom they want in the final line-up for next month. The three players cut from the squad included youngsters Callum McRae, Quinn Clinton and Angus McWilliam.

The only junior Tall Black to make the cut was Isaac Letoa who will join the rest of the inexperienced squad in Lebanon. The cut means that the team will be a much smaller unit with Sam Timmins and James Hunter on hand to cover the centre positions. The pair are part of the five debutants along with Luke Aston, Dyson King-Hawea and Isaac Letoa who will all be hoping to impress in the squad for the Asia Cup.

With many of the best New Zealand players absent from the squad and with no one older than 26, coach Henare is feeling optimistic and excited to see just how the young players will develop. In a press statement, Henare said that the great thing about having young players on the squad is that they are eager to learn and bring a fresh approach to the game. Many of the young players have had a taste of international basketball but this will be another level all together.

A Chance for the Youngsters to Shine

Henare said is keen to see what these young players will do with the chance they have been given. Meanwhile the lack of experience in the young squad should give Wellington Saint’s star Shea Ili a chance to show off his talent and take on the role of the main offensive. This leaves Reuben Te Rangi, Jordan Ngatai and Finn Delany doing the heavy lifting where needed while the youngsters find their feet.

The New Zealand team will be in action later this week, playing two warm-up games against the Chinese national team. They will then head over to China for their pre-cup games. Starting on the 8th of August, the Tall Blacks will take on Lebanon, South Korea and Kazakhstan in their pool games.