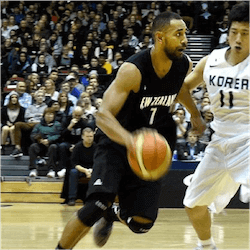 Tall Blacks off to a Great Start at Asia Cup

The New Zealand men’s basketball team have kicked off their FIBA Asia Cup campaign with a comfortable win over Kazakhstan in Beirut. Derone Raukawa impressed as usual. The young kiwi shot a game high of 17 points on 7 of 12.  The opening game of the tournament was eerie to say the least. With most of the locals waiting for their home team’s performance later in the evening, the stadium was only filled with the sounds of the players on court.

As a testament to the growth of the young side, the Tall Blacks were able to focus entirely on the game and work efficiently as a team. A particularly impressive second half effort was more than enough to make head coach Paul Henare crack a smile. The New Zealand team started off showing a bit of nerves, which was understandable considering the lack of experience at hand. The first half saw the Tall Blacks shoot just 31%.

What they lacked in offence, the Tall Blacks made up for in defence in the first half. They locked down the back half of the court, a feat not matched by their Kazakhstani rivals. By the break, New Zealand team had taken a small lead thanks mainly to the efforts of Shea Ili who led the scoring with 7 first-half points. It was only in the second half that the team finally found their feet and attacked the basket with fierce determination.

A Confidence Boost For the Team

A string of three pointers from Finn Delany, Jordan Ngatai and two strong movements by Shea Ili took the score to 49-33, breaking the game wide open. The Kazakhstan team threatened a quick comeback but were shut down after a the All Blacks took a time-out with Henare imparting some words of wisdom. A strong response led by Raukawa extended their lead. Both Raukawa and Delany had busy night. Raukawa had a total of 6 rebounds with 3 assists while Delany scored a double-double of 15 points with 10 rebounds.

The Tall Blacks finished out the match with a convincing 70-49 win. For his part, Henare was pleased with the teams opening effort. Speaking to the press, he said that it was a great start for the young New Zealand side. He believes they should take a lot of confidence from the game. He reiterated the fact that the Kazakhstan team are full-time professionals while the Tall Blacks are not.