Teams in Prep for FIBA Eurobasket 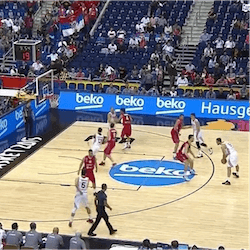 The FIBA Eurobasket To Start Next Month

Kicking off in the end of August and running until the 17th of September, the 2017 FIBA EuroBasket is hosted in 4 countries this year.

Finland, Israel, Romania and Turkey will all host events this year.

Zaza Pachulia, who recently brought the Larry O’Brien trophy home from his stint in the NBA, was honoured by the president of Georgia with the Georgian Order Of Honour award.

The player will be leading his home country into the EuroBasket with the experience he earned playing for the Golden State Warriors. Georgia has recently shone in friendlies against Lithuania, Latvia and Czech Slovakia. Hopes are high for the side to make their country proud.

The team is currently very well balanced but it would have been nice to see Viktor Sanikidza still in the team, as the veteran player always added a bit of magic to the side.

The side is also without Beka Burjanadze, who is still recovering from a right knee injury. Pachulia has stated that his side is aiming to improve on their respectable 11th place finish in the 2011 FIBA EuroBasket event.

Georgia will first be heading to Israel where the Group B matches will be held and they have started preparing for their showing in earnest. The team remains quite similar to their 2015 side, with the notable return of veteran player Yotam Halperin.

This will be Halperin’s first return to basketball after 2 years, but Israel will need any edge they can get as they will be facing a strong field. Group 2 features Georgia and Israel of course, but also Italy, Germany and Ukraine. Four of these sides will progress to the 16th round which will be held in Istanbul.

Currently France is one of the favourite sides with bettors. The team has been performing consistently well since 2011 and most bookmakers are looking at pretty even odds ranging from 7/5 to 1.

Greece, Slovenia, Poland and Finland are equally popular with bettors. Greece gets similar odds to France, with Iceland being the outsider with odds ranging from 100 to 200 to1.

The European rankings list the top 5 teams as Spain, Serbia, France, Lithuania and Turkey. Russia comes in at no 6 but they are always a solid bet, having won the most medals of any team in the EuroBasket.