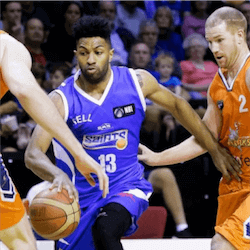 The Wellington Saints have continued their winning streak in the 2017 New Zealand National Basketball League. The Saints held off a strong Hawks team at the Pettigrew Green Arena to take their record to 4-0 for the season. Their 102-91 win over the Bay Hawks was mainly due to Corey Webster continuing his sensational opening season form. Webster finished the night with a massive 33 points including 4 rebounds and 3 assists.

Corey decimated the Hawks defence with his long-range shooting and hard drives into the paint. Other notable contributions came from Shea Ili shooting 19/4/4 and Tai Wesley shooting 19/6/7 to put Wellington on top. Despite the fact that the score line was mostly in the Saint’s favour, it took a long while for the Wellington team to actually pull away from the Hawks. The Bay Hawks found great success in slowing down the Saint’s attacking phases adding their own points inside the paint.

While they may have finished strong, the Saints suffered their first quarter defeat for the season after Ana Haku put the Hawks up 18-16 with just seconds left on the clock. The Hawks managed to hold onto their lead for most of the second period. In the final minutes of the second quarter, the Saints stepped up the tempo and managed to pull into the lead with 44 points to 42.

Hawks Hung on Until the Final Quarter

The saints continued their momentum in the third quarter racking up another 30 points to the saints 22. This put them into a comfortable position heading into the final quarter. Both Tai Wesley and Corey Webster steered the ship for the saints, adding 10 and 12 points respectively. The Hawks struggled to keep Webster driving in to the middle while Wesley did all the damage up close.

The Hawks managed to hang around until the midway through the final quarter. This was mainly due to the efforts of Jarrod Kenny who finished the game with 22 points and 15 assists. Saints coach Kevin Braswell had to put his key players in for the heavy minutes to get clear of the Hawks as the clock wore down.

At the conclusion of the game, the two teams now find themselves on opposite sides of the NBL ladder. The Saints are sitting comfortably in 1st while the Hawks have yet to win a game and sit at the bottom of the ladder alongside the Nelson Giants.