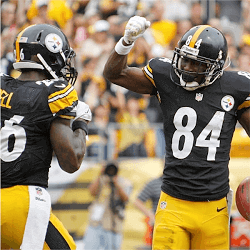 In a nail biting final, the Pittsburgh Steelers narrowly defeated the Baltimore Ravens. With a final score of 31 to 27. A touchdown with 9 seconds left on the clock was enough to tip the scales in Pittsburgh’s favour even though both teams fought hard. The Ravens took an early lead but three touchdowns in the final quarter took them down.

This win has sent the Ravens packing as they concede their postseason appearance to the Kansas City Chiefs.

Le’Veon Bell played a key role in driving the Steelers to victory. He managed to keep his head in the game and exploit every opening offered by the tight Ravens defensive line.

Unfortunately the Raven’s more offensive second half was not enough for them to win the night , even with the Steelers’ defence missing a lot of tackles that could have secure them a more definitive lead.

Ben Roethlisberger had a slow first half but his presence eventually showed its worth when he had a stellar fourth quarter. With 3 touchdowns, passing for 279 yards and a pair of interferences, he proved once again his immense value to the Steelers.

In the Ravens camp Kenneth Dixon and Joe Flacco made mince meat of the Steelers patchy defensive work, but of course it was not enough in the end.

Key performance was given by the 37 year old Steve Smith Sr. The legendary receiver left no questions about his ability by burning the Steelers’ powerful secondary for 79 yards.

That said, the Ravens still didn’t supply much threat deep in the Steelers’ territory. Their loss was further exacerbated by poor performances in the red zone.

On a Winning Streak

This title was the Steelers second title in 3 years. Fans are hoping that this momentum will carry the team through the playoffs. They are currently the number 3 seed whether or not their week 17 performances are up to scratch.

With The Ravens eliminated, there are certainly many upset Ravens fans who must be hating 2016 even more than the rest of the internet. The teams that will be appearing from the AFC will consist of the New England Patriots, The Oakland Raiders, The Pittsburgh Steelers, Houston Texans, the Kansas City Chiefs and the Miami Dolphins.

The NFC competitors will feature the Dallas Cowboys, The Atlanta Falcons, The Seattle Seahawks, the Green Bay Packers, the New York Giants and the Detroit Lions.