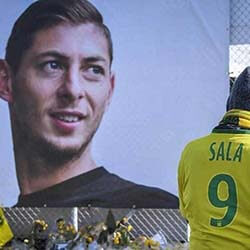 An inquest jury has reportedly now been informed of how pro-footballer Emiliano Sala had been put under immense pressure to complete a big-money transfer to the Premier League during the time leading up to his death in a plane crash.

According to Sala’s mother, Mercedes Taffarel, the weeks leading up to the plane crash had been a very intense time for the player as he prepared to travel from Nantes in France to join Cardiff City.

Cardiff had put a great deal of pressure on Sala to complete the deal in record-time. Meanwhile, Nantes had been pushing for more money, which had left Sala feeling as if he were stuck in the middle of the demands, explained Taffarel. She also said that Sala had experienced doubts about whether or not to ahead with the transfer.

Argentina-born Sala was set to join Cardiff City as part of a £15 million deal.

According to the Dorset coroner’s office, the 28-year-old striker died when the plane fell close to Guernsey, on January 21, 2019. The pilot of the plane, David Ibbotson, was never found.

Taffarel explained in a written statement how her son’s goals-scoring prowess in France had been the element to lead to calls for him to be selected as part of Argentina’s national team. She said he had an enormous appreciation for the Nantes club and all its fans.

After the offer in terms of the move to Cardiff had been made in December of 2018, Sala had according to Taffarel felt that the time had been right to make a significant move.