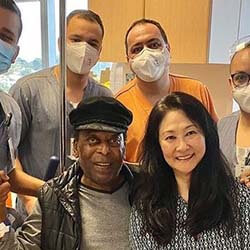 It has now been confirmed that living football legend Pelé has been discharged from a month-long stay in hospital where he’s been receiving treatment following the removal of a tumour from his colon on September 4. The Brazilian great is reportedly recovering at a steady pace.

According to an announcement by Sao Paulo’s Albert Einstein Hospital, the 80-year-old is in a stable condition but will now continue with chemotherapy treatment.

Pelé this week expressed joy and happiness at being discharged via social media. He said that while he’s no longer able to jump, he’s been punching the air with gratitude and happiness about being back home.

The football great has been publishing several photos and videos of his recovery process on Instagram. The tumour was discovered during a routine medical checkup in August this year, and treatment commenced shortly after.

Pelé also this week thanked the medical staff at Albert Einstein Hospital, saying he’d been treated with humanity and compassion and had been made to feel very welcome and comfortable during his extended stay.

While retired for quite some time, the 80-year-old is still considered to be one of the greatest football players of all time. After bursting onto the global football scene at only 17 years old in 1958, he scored a phenomenal six times when Brazil won their very first soccer World Cup. He would eventually go on to help his country to a stunning 3 World Cup titles.