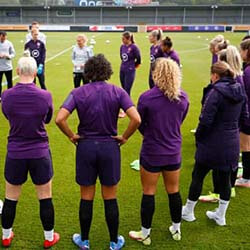 England on Thursday announced an all-new annual women’s international football tournament set to run for at least the next three years. The four-team tournament will be handled on an invitational basis and will commence in February next year.

The format will be round robin, with the tournament set to consist of three double-headers taking place across a total of seven days. According to the announcement, which was made by Baroness Sue Campbell, the director of women’s football at the Football Association, further details surrounding venues, ticket, and other information will be released over the course of the next few weeks.

The first edition of the new tournament will be joined by Spain, Germany, and a third nation still to be announced. The annual competition is expected to greatly boost England’s international women’s football calendar, said Campbell this week. But it will serve another purpose also, which is to ensure the new manager of England women’s football, Sarina Wiegman, is placed in a position that will allow her to rest her players more regularly against A-class players on the global international stage.

The tournament will also seek to create interest from fans. This will be achieved by giving English fans the opportunity to regularly see their team play against some of the world’s best opponents, explained Campbell. It will furthermore serve as a training ground for providing the country’s women’s football team with the best possible chance of competing in major tournaments over the coming years.