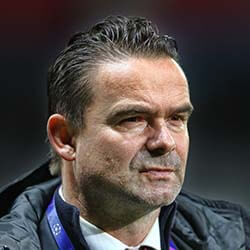 Ajax director of football Marc Overmars has quit after nearly 10 years. The former Arsenal, Ajax, and Barcelona winger has been accused by his club of having sent inappropriate text messages to female colleagues.

Overmars reportedly made the decision to step down of his own accord after lengthy talks with the board and CEO Edwin van der Sar.

According to Overmars, he feels ashamed by how his behaviour has been interpreted by others. He said he at no point realised that he had crossed a line, but that he sees no other option but to quit the club.

Overmars recently had his contract officially extended until the end of the 2025-26 season.

According to Ajax board chairman Leen Meijaard, the situation is a dramatic and embarrassing one for everybody involved in the saga. He added that while Overmars is undoubtedly the best football director ever appointed by Ajax, continuing in the role wasn’t an option due to the devastating impact his behaviour has had on the many women affected.

The situation surrounding Overmars is reportedly a major bombshell in the world of sports in the Netherlands right now. According to Dutch football journalist Marcel van der Kraan, since Overmars had been the one to see the club to four league titles, the news of his inappropriate behaviour has come as a particular shock to many.

Overmars played four years for Barcelona after moving to the club in 2000.