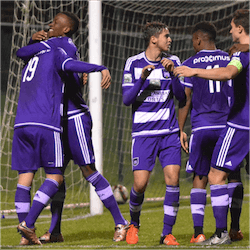 With the quarterfinal draw of the Europa League now out of the way, Lyon have got themselves a difficult matchup with Besiktas. This also means that Manchester United know exactly what they need to do going forward. Jose Mourinho’s side will face off against Belgian Club Anderlecht in the quarterfinals, which seems alright with them. Manchester United are the only English side left after they managed to get a 2-1 aggregate win over the determined Russian side, FC Rostov.

The English team come in as favourites to win the competition for the first time. A win in Sweden could earn them a smooth passage into next season’s Champions League. This is a fact that Juan Mata, knows all too keenly. Speaking to the press, Mata said that he feels his team has a good chance of getting to the Champions League through the Premiership. However, it is important for the side to stay focused and aim for the trophy.

A Tough Matchup for the Belgians

For Anderlecht, the feeling in camp is serious but positive. According to Anderlecht president Roger Vanden Stock, the draw against Manchester United was probably the hardest they could have faced. However, he does feel that his side could pull off the upset. Speaking to the press, Vanden Stock said that you never really know what will happen. Anderlecht didn’t think they would beat Zenit, but they came out victorious.

Herman van Holsbeeck, Anderlecht’s coach was also feeling positive about the draw. He believes it is a good opportunity for his players to take on a team of high calibre and show what they have to offer. This will be the fourth meeting between the two with Manchester United winner all previous matchups. Another thought to ponder is the fact that United recorded their biggest European victory against Anderlecht in 1956 when they cleaned up with a 10-0 win.

Anderlecht is sitting at the top of the Belgian League with the playoffs still to take place. If we take a look back, we can see that Spanish sides have won seven of last eleven European titles. Celta Vigo hope to extend the Spanish domination as they prepare to take on Belgian club Genk. In another quarterfinal draw, former champions Ajax take on Germany’s Schalke who also won the title back in 1999.