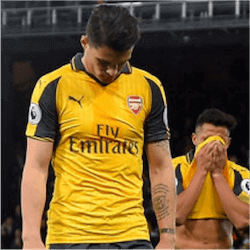 Another Dismal Performance for Arsenal

For punters and Arsenal fans, a look back at the team’s last seven games could have predicted how their match against Crystal Palace would pan out. It was not surprising then that Arsenal produced another dismal away performance against a relegation-threatened side in the English Premier league. Notching up another loss to their already growing tally was not what the men in red wanted, seriously damaging the team’s chances of qualifying for the Champions League next season.

Crystal Palace found and exploited Arsenals poor defence, opening the scoring in the 18th minute. Andros Townsend got the only goal in the first half with Yohan Cabaye and Luka Milivojevic both adding to the total in the second half from the penalty spot. Arsenal now find themselves in a position where thy have conceded three goals in each of their last four away games. This leaves them floundering in 6th place, a full seven points from the top four teams.

It was undeniably a humiliating result for the Arsenal team and manager Arsene Wenger. While he contemplates signing a contract extension with the club he has coached since 1996, the public seem to be making the decision for him. During the second half, Arsenal fans at Selhurst Park could be heard singing about how he was unfit to wear the shirt. The team also seemed to pick up on the vibe, as displayed in their lacklustre performance.

Crystal Palace out of Relegation Zone

For Crystal Palace, this makes five wins in six games. The win over Arsenal put the team a good six points clear of the relegation zone. The win boosts Sam Allardyce’s bid to hold his record of never being relegated from the League. Instrumental in their win against Arsenal was Mamadou Sakho, the talented centre back who was on loan from Liverpool. Winger Wilfried Zaha and striker Christian Benteke also caused the Arsenal defence to take stock of the situation.

In the early stages of the game, Arsenal had the possession but it was Palace who looked dangerous every time they moved forward. For the opening goal, Townsend found himself free just six meters out when Zaha floated a his cross through for Townsend to put away. In the second half, Arsenal’s defence all but collapsed.

A second floating cross from Zaha gave Cabaye the perfect opportunity to angle his shot over the head of Arsenal goal keeper to make it 2-0. Things went from bad to worse when Martinez was judged to have tripped Townsend giving away a penalty that Milivojevic slotted home. Arsenal have now only won two of their last eight games in the Premier League.