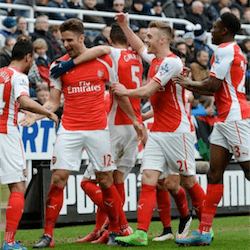 Arsenal have maintained their perfect record in the Europa League with a late win over hosts, Red Star Belgrade on Thursday night. The Gunners now head straight to the top of Group H with a maximum of nine points. Arsenal fans certainly had something to celebrate, even though they were made to wait for a bit of football brilliance from Giroud to seal the Gunners third successive win.

The action occurred in the 80th minute, less five minutes after Red Star player Milan Rodic was sent off for a second yellow card infringement. Girould was in the perfect spot and produced what can only be described as gymnastic-styled acrobatic overhead kick straight into the goals. Red Star Belgrade retain their second spot position in group Group H though, despite the fact that Cologne lost their match against BATE Borisov in the other Group H fixture.

The Arsenal match was slow for most part. In fact, it took 15 minutes before the Gunners even caught sight of the oppositions goals. Theo Walcott was able to collect the ball after a free-kick, striking from 10 yards out. Red Star keeper, Borjan was on hand to make the save though. The hosts had the opportunity to open the scoring in 10 minutes later. Receiving a corner kick, Richmond Boakye connected the header, but it stuck the underside of the crossbar and swung wide of the goals.

The second half saw the Gunners with a little bit more spring in their step. They found a couple of good chances in quick succession with both Giroud and Walcott dragging wide of the posts. Reiss Nelson blasted a cracker, which was palmed safely away by Borjan. On the other side of the field, Petr Cech was under fire as he saved a brilliant strike from Nenad Krsticic.

The hosts had to finish off the game with just 10 men when Rodic was sent off. His second infringement came after he and Francis Coquelin both rose for the ball with Rodic catching Coquelin in the face. Arsenal quickly took advantage of the reduced defence. Five minutes after Rodic was sent off, Jack Wilshere set the ball up for Walcott who produced a beautiful ballooning cross picked up by Giroud with a backwards, over-the-head stunner, sealing the win.