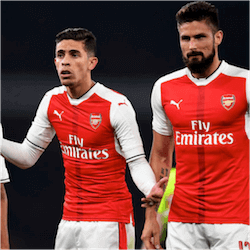 Arsenal football coach Arsene Wenger is having a tough year. For the first time in 20 years, Arsenal fans will not be seeing their beloved team in the Champions League. Any hope of the team squeezing into the top four of the Premier League was reliant on either Manchester City or Liverpool slipping up in some way. But alas, it was not to be as they both won their respective games, joining Tottenham and Chelsea in entering the Champions League.

Despite beating Everton 3-1 in their final match, Arsenal didn’t do enough early on in the season. Their five successive victories came just too late for a team with so much potential. As the players walked around the stadium for a lap of appreciation, there was in fact very little for the fans to celebrate. Coach Arsene Wegner didn’t even join the team, choosing to stay on the touchline with a slight scowl on his face.

It remains to be seen whether Wegner will stay in charge of the side next season. The Frenchman refuses to discuss his future with the club until after the FA Cup final against Chelsea has been played. On the other side of the coin, Antonia Conte’s side is chasing down a double. The team finally picked up the Premier League trophy after defeating Sunderland 5-1.

It was captain John Terry who collected the trophy for Chelsea. This was his final act in his 22-year history the franchise. For Tottenham, their wait for their first title since 1961 goes another year. The runners up finished up their best season in over 54 years with a convincing win against related side Hull.

Meanwhile in Spain, Real Madrid has won the Spanish league for the first time in five years. They defeated Malaga 2-0 with Cristiano Ronaldo scoring the first goal just two minutes into the match. Karim Benzema drove home the second goal to seal the match in the second half. The win game Madrid a full three-point advantage over Barcelona who managed to defeat Eibar coming from two goals down at Camp Nou.

Going into the final round, Madrid needed a draw to avoid extending their worst title drought since the 1980’s. They also needed a win to keep Barcelona from claiming the Championship for a third straight year.