Auckland City Knocked Out Of The Club World Cup 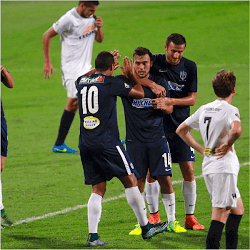 The Kashima Antlers have pulled off a spectacular win against the mighty Auckland City FC team beating them 2-1 in a FIFA World Cup Playoff. After coming from a goal behind, the hosts played a sensational game pipping the New Zealand team in the dying moments of the game to snatch victory, effectively ending Auckland’s goal of a World Cup final.

The home crowd in Yokohama were in great spirits from kick off as their team enjoyed the lion’s share of the possession in the first half. Despite their relentless pressure, it was the New Zealand side that got the first chance on the 17-minute mark. Ryan De Vries delivered a magnificent cross from the left of the field to find Joao Moreina who flicked it on to Emiliano Tade for a chance at goal. But it was not to be as the Argentinian’s powerful low strike was expertly saved by the veteran Japanese goalkeeper, Hitoshi Sogahata.

The first half ended with both sides goalless. In the second half, Auckland City FC drew first blood when Dae Wook Kim rose above the rest to header home a beauty of a free-kick by Emiliano Tade just four minutes into the second half. After suffering through a goalless first half, the fans were treated to even more action Seventeen minutes later. This time is was the Antler’s, Shuhei Akasaki who slotted home the equaliser bringing the crowd to their feet.

A Late Goal to Seal the Deal

It was just four days earlier, that Kashima downed the mighty Urawa Reds in the J.League final. However, their performance on the pitch was less than exemplary, conceding 19 fouls across the match. When the game was looking as if it was destined for extra-time, Kashima created the perfect opportunity with Mu Kanazaki grabbing a late winner from close range to seal the deal.

Aside from the score line, the 100th World Club Fixture proved to be an important event in the history of a FIFA match. It was the first time where video assistance was used to support referees with crucial match-changing decisions made in real time. After winning the match against Auckland City FC, the Kashima Antlers went on to face tournament newcomers Mamelodi Sundowns from South Africa in Osaka. The Japanese team again showed off their considerable talent, drumming the Pretoria side 2-0 in an excellent display of skill and determination.