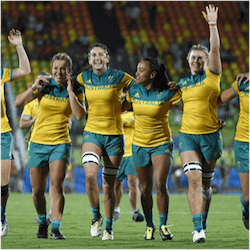 Credit To The Australians

Whilst it’s true that England may not necessarily want to hear about yet another area in which they are outdone and out-performed by Australia (see: Ashes Test), it’s also true that sometimes, it’s a good idea to stick your pride in your pocket and pay attention to what someone else is doing right so that you may follow suit and enjoy the same success also.

And really, one only needs to look at what happened with the recent BBC Sports Personality of the Year Award, to realise that something is amiss in the land of the Brits.  On Sunday past, the four female nominations in the BBC Sports Personality of the Year Award received the fewest votes of all, and not just by a couple.  Just 8 per cent of the total votes cast were in favour of the female participants.

Now, consider by contrast Australia’s own version of the award.  Mere days earlier, the Australian Broadcasting Corporation held its Sports Personality of the Year Award, also voted on by the public.  The award went to Sam Kerr, the superstar striker in the Aussie women’s football squad.

Even stranger is the fact that it has been a landslide year in the UK as far as women in sport goes.  England won the Women’s Cricket World Cup at Lord’s and no fewer than 1.1 million spectators turned in on the action on Sky Sports.  This is a record for any women’s sporting event, according to the numbers released by Sky Sports.  Subsequently, the women’s cricket side was awarded the BBC Sports Personality Team of the Year Award.

What, do you ask, are we waffling on about?  Well, it’s quite simple.  The award was awarded by a panel of adjudicators, and not by public vote.  Somewhere, something is still very amiss.

The ultimate challenge is converting the viewership numbers into fans who will continue to follow women’s sport all year round.  Also, to get those fans to a place where they realise that it’s not enough to follow and enjoy the games, but also to become involved when votes are cast for awards such as the BBC’s personality award.  And this is but one example.

Yes, progress is being made in the UK.  But the English have a ways to go yet to reach the levels of awareness and progress that is seen in Australia.  It would be unfair to make mention of progress in a general sort of way, without making mention of Cricket Australia.

For all the controversy that surrounded Cricket Australia for most of the year as a result of the pay disputes, they were the ones who spearheaded the immense progress that we have seen in women’s sport and the elevation of women’s sport to its rightful place in the ranks.