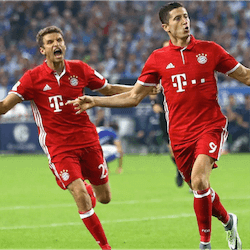 New Zealand football fans had more European betting options this past week, in the final ties of the 2016-17 UEFA Champions League quarter-finals. At the time of writing, punters were awaiting the announcement of the draw for the semi-finals, which begin on 2 May, to see how Atletico Madrid, Real Madrid, Monaco and Juventus will be matched up in the next round.

All four QF second ties produced moments of drama, but Bayern Munich fans feel particularly aggrieved, as the drama in their match against Real Madrid all seemed to go against the German team, never in their favour. After being beaten 2-1 at home, Bayern were 2-1 up at full time in Madrid, with overall scores level and both teams on two away goals.

All the Munich side needed was one more; but a controversial, probably undeserved red card on Arturo Vidal in the 84th minute effectively put that out of reach. To rub salt in the wound, the Merengues scored three more goals in extra time. Two of those were put in by Cristiano Ronaldo from what looked like offside positions, giving Bayern supporters even more reason to feel cheated.

Defending champions Real Madrid are the favourites to win the 2016-17 Champions League, with bookies offering them at 13/8. But Italian side Juventus at 2/1 is a strong contender too. New Zealand punters will have a dilemma if the semis draw sets the two teams up to meet in the final.

Juventus are through to the semis by virtue of a 3-0 win against Barcelona in their first QF tie in Turin. FC Barca fans were hoping their side could pull a repeat of their miraculous resurrection against PSG in the Round of 16, but not even a baying home crowd at Camp Nou could inspire the Spanish giants to those heights in the return match. Their second tie finished in a goalless draw, sending the Italian team to the semis.

Atletico Madrid held Leicester City to a 1-1 draw in their second tie, putting the Spanish side through on the strength of their 1-0 win in the first tie. Monaco improved on their 3-2 first-tie defeat of Borussia Dortmund with a 3-1 win at home, securing them the fourth spot in the semis.