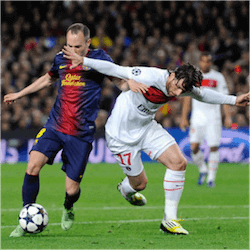 Second Leg; Champions League Round of 16

New Zealand football fans watched the 2016-17 UEFA Champions League closely over the past fortnight, as the second legs of the Round of 16 were decided. Friday’s quarterfinals draw should spark interest from the online betting community in earnest.

Punters who support English sides now have their hopes set on Leicester City. Last year’s English Premier League winners are the only team from across the Channel to make it to the quarterfinals, after they beat Sevilla 2-0 at home on Tuesday, to finish 3-2 up overall. However, since their Premier League Championship victory in 2016, the team has suffered mixed fortunes, plus the controversial replacement of manager Nigel Pearson with Claudio Ranieri.

Many punters are doubtful that the underdogs will be quite as impressive against top-flight European clubs like FC Barcelona, Real Madrid, Bayern Munich, Juventus or Atletico Madrid. These giants have a wealth of international talent amongst their South American and African players, so Leicester could be in for a shock next round.

Manchester City and Arsenal Out of Contention

Slim though they might be, Leicester’s chance of taking the championship is the only option left for anyone determined to root for an English side. Manchester City won their Round of 16 first leg at home, beating Monaco 5-3, but in the second leg on Wednesday, Monaco won 3-1 to make it 6-6 overall, and go through to the next round on their away goals.

The bigger disaster, for fans of the English teams, was Arsenal’s failure to make the final eight. They were thoroughly lacklustre in their second-leg home match, losing to Bayern Munich 5-1; the same losing margin as their first leg in Munich last month.

Real Madrid, Borussia Dortmund, Juventus and Atletico Madrid all sailed through their Round of 16 without complications. But the biggest upset in the second leg was dished out by FC Barcelona.

No side had ever come back from a four-goal deficit in the first leg of a UEFA Champions League knockout round to win through, so after their 4-0 away loss to Paris Saint-Germain last month, it seemed Barca’s tournament was over. In a record-breaking comeback, they proved that assumption wrong with a stunning 6-1 win that set the Camp Nou crowd roaring, and saw them safely into the final eight.