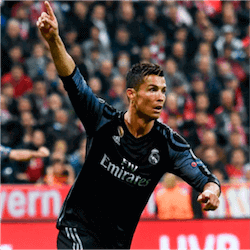 Cristiano Ronaldo’s epic 100 European club goal haul couldn’t have come at a better time for Real Madrid. It was not so much the sheer number of goals scored but the timing of his goals that makes Ronaldo one of football’s greatest players. In their quarterfinal match against Bayern Munich, Real Madrid should have been facing a two-goal deficit after half time.

Having been completely outplayed by Carlo Ancelotti’s team, Real Madrid were entirely reliant on Ronaldo to pull them out of trouble. Stepping up for his team, Ronaldo not only managed to score the equaliser but also created the trickery needed to provoke a foul that led to the departure of Javi Martinez. Bayern were forced to play the remaining 32 minutes with just 10 men on the field.

It was in this crucial time, that Ronaldo slotted home his second for the match to give Real Madrid the lead and a massive advantage going into the second leg at the Bernabeu. While he may have taken a while to do it, Ronaldo has beaten Lionel Messi to become the first player to reach 100 European Goals. Messi is currently sitting at 97, but seems unable to break through to that all important century.

While Ronaldo bathes in individual glory, his Real Madrid team are also aiming to create history by becoming the first team to retain the European Cup in the current Champions League format. Their win over Bayern Munich puts them back up as tournament favourites. We also have to remember that this is a team that has reached three out of the past seven Champions League finals.

Real Madrid were taken to the edge in their match against Bayern. Finding themselves one goal down, they had to demonstrate their defensive expertise while waiting on their chances for retaliation. A key moment in the game was when Vidal missed his penalty going into half-time. In the second half, the team had to deal with the loss of Gareth Bale to a hamstring injury. At this stage, it is unclear whether Bale will be able to play the return leg.

Towards the end of the match, Real Madrid had a fleeting chance of scoring a third when Marcelo flew out wide opening up the centre. Thankfully for Carlo Ancelotti, nothing came out of the run. Speaking to the press, Ancelotti said that if Real Madrid has scored a third, it probably would have killed the qualification for them.

If you want to bet on the Champions League, check out the promotions on offer at Sportsbet. The current Champions League promo offers you the chance to place a Correct Score bet on any Champions League match, and if your selection loses but the team wins you’ll get up to $50 back in Bonus Bets!