Chelsea One Win Away From Premiership Title 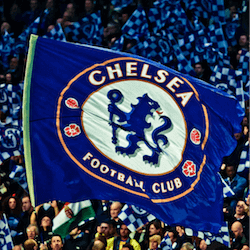 Chelsea Close in On Premiership Title

Chelsea are just one win away from claiming the English Premier League title after defeating Middlesbrough with an impressive 3-0 show on Tuesday. The Blues now have their chance to claim a second title in just three seasons when they face off against West Bromwich at the end of the week. With another win in the bag, Chelsea now move a full seven points clear of Tottenham Hotspur and have basically consigned Middlesbrough to relegation status.

As it stands, Middlesbrough trail Hull by a massive six points with just two games left to play for both sides. Middlesbrough need a miracle though as Hull have the superior goal difference, leading by 12. With Tottenham Hotspur faltering on Friday, Chelsea was keen to take advantage of the opportunity to extend their lead. Goals came in thick and fast with Marcos Alonso, Diego Costa and Neemanja Matic heading up the attack at Stamford Bridge.

With just seven minutes of play down, Cesc Fabregas orchestrated a brilliant run up the line with a diagonal cross to Alonso who volleyed the crossbar and missed the goal. Middlesbrough heeded no warning though as they allowed Fabregas to dominate the open areas and were subsequently punished for their poor defence in the 23rd minute.

This time around, Fabregas manged to pick out a slightly more reliable finisher in the form of Diego Costa. With another expertly timed cross; Fabregas gifted Costa with the perfect opportunity to slot the ball straight through Brad Guzan’s legs. In doing so, the striker was able to equal his league best with a total of 20 for the season.

In the 34th minute, it was Cesar Azpilicutea who imitated Fabregas with a perfect cross to Alonso on the back post. Alonzo got it right this time volleying it past Guzan to make it 2-0. Just when Middlesbrough was getting a handle on Fabregas, he switched up the angle of attack playing Victor Moses on the other side of field. An expert save from Guzan prevented Moses from claiming the third before break.

In the second half, Chelsea continued their onslaught with Pedro hitting the crossbar and Alonso missing his shot out wide. The fate of the match was sealed in the 65th minute when Neemanja Matic chested a cross from Fabregas and slotted home a beauty past Guzan to make it 3-0.