City or Sydney for the A-League? 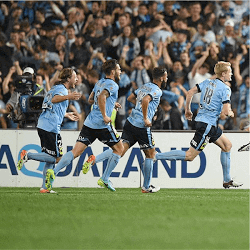 The last A-League clash between Sydney FC and Melbourne City, a hard-fought match last Friday filled with drama, penalties, a disallowed goal and a red card, ended in a 1-1 draw. The 14,688 supporters at Sydney’s Olympic stadium saw a thrilling game, though, the intensity increased by Sydney’s thirst for revenge after the 1-0 defeat inflicted on them by City just 10 days earlier, in the FFA Cup Final.

The draw allowed the Sky Blues to hang on to their place at the top of the A-League log, on 24 points after a run of 10 league matches undefeated so far this season. City is only six points behind them. With just two matches each left in the round-robin section of the competition, both look set to make it into the eliminations rounds, and they could possibly face each other in the final next year. If that is the case, working out which side the smart money will be riding on requires comparing both teams, section by section.

City’s Midfielders and Forwards Have an Edge

Sydney’s Josh Brillante and Brandon O’Neill have proven a dazzling partnership in the midfield, setting up great goals with star playmaker Milos Ninkovic. But Luke Brattan and Neil Kilkenny are no slouches for City either, and Melbourne’s midfield is strengthened by the ability of its forwards to drop back in support.

While Sydney has top forwards in Bobo and Filip Holosko, they have been off-form in recent weeks. Alex Brosque has been doing brilliantly, but right now the Sydney forwards appear a little outclassed, compared to the on-form forward power that City can deploy: Bruce Kamau, Fernando Brandan, Tim Cahill, Nicolas Colazo and more. In combined midfield/forward attack, City has the edge.

Sydney Stands Out in Defence

On the other hand, defence and goal-keeping is the area in which the scales tip in the Sky Blues’ favour. With Danny Vukovic in goal, and Alex Wilkinson directing a line-up that includes Rhyan Grant, Michael Zullo or Matt Jurman, Sydney’s defence is likely to be more impenetrable than City’s combination of Dean Bouzanis in goal, protected by the grit of Ivan Franjic or Manny Muscat.

Even though the arrival of Michael Jakobsen has firmed up City’s shaky defence, Sydney’s remains generally stronger. And since a rock-solid defence could be the decider, punters looking to bet on future clashes between these two sides may well opt for Sydney FC for the win.