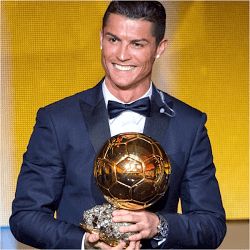 Cristiano Ronaldo, the famous Real Madrid forward, has won the 2016 Ballon d’Or for the fourth time, beating arch-rival Lionel Messi in order to do so. The 31-year old player is now just one behind Barcelona’s Messi, who managed to take the honour for a fifth time in 2015. Antoine Griezmann, the French Atletico Madrid forward, managed to place third in the vote.

Cristiano Ronaldo was a key figure in Real Madrid’s win of last season’s Champion League, and managed to score three goals as Portugal went on to win the Euro 2016. He has managed to win the Ballon d’Or in the years 2008; 2013; 2014; and 2016, with Messi being the only other player to receive the award since he won it for the first time in 2009.

Ronaldo stated that he had never imagined he would win the Golden Ball a total of four times, and went on to say that he was “pleased… proud and happy”. He took the chance to thank all of his teammates; the national team, Real Madrid, and all of the many people and players who had a hand in him achieving this coveted individual award. The former forward for Manchester United has managed to score a total of 19 goals in 20 games for his club and country over this term, with this total adding to the 54 goals he managed last season.

Ronaldo and Messi have dominated the list of Ballon d’Or winners over the past ten years:

Ronaldo’s Real Madrid teammate Gareth Bale managed to finish in sixth place for the vote, and striker for Leicester City Jamie Vardy has the honour of being the only Brit to appear on the 30-player shortlist, sliding in to the top ten candidates at eighth place.

This award is voted on by 173 journalists worldwide, and has been awarded every year since its debut in 1956 by France Football. In the past six years it transformed into the FIFA Ballon d’Or thanks to its association with the world football governing body, and is handed to the player believed to be the world’s best.