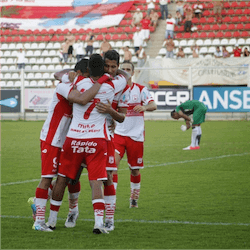 History was made this week with the promotion of Argentinean Reserve League team, Deportivo Moron to the Primera B Metropolitana League. Emotions of fans and players alike were running high after the 2-1 win against Platense. Affectionately known as the Gallo, Deportivo Moron broke a 26 year drought to rise up among the ranks and clinch their much sought after promotion.

Celebrations amongst fans continued until dawn in front of the Municipal Palace. Fans were elated that the team’s 17 wins, 12 draws and 3 losses were enough to propel the team into the upper leagues. The team still has 4 more matches left in the Reserve League, but with their 63 points earned, they are uncatchable on their ascent, even if their closest rivals, Atlanta, win all 3 of their upcoming matches.

The match kicked off immediately with Deportivo Moron scoring the first goal within 5 minutes. Rodrigo Diaz scored the first goal, securing an early lead for Deportivo and setting the tone for the rest of the match. It was only 5 minutes later that Javier Rossi secured Deportivo’s lead with a beautiful goal.

From here on in Deportivo kept it safe, playing defensively and only faltering in the 40th minute when Platense’s Luis Quiroga scored for his team. The defence of Deportivo should receive allot of credit as they allowed the top scorers, Diaz and Damian Akerman the freedom to attack. They helped the team achieve their 63 league points with 19 goals in 32 matches.

Akerman has had a long and seasoned history with Deportivo. He first joined the club in 2003 then went through essentially went through a revolving door with the team, leaving and returning three times.

Finally he has come back to the team to take them through to Primera B. The 37 year old will certainly relish this victory form Deportivo. Deportivo had not been this high on the Reserve League table since 2000.

Deportivo recently welcomed a new striker, Nicolas Ramirez perhaps as a future replacement for the 37 year old Diaz and Akerman.

Deportivo Moron have a very bright future ahead of them after this years sterling performance in the Argentinean Reserve League.