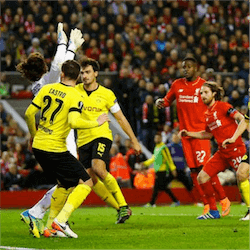 Europa League Round of 16 Football Complete

With the Europa League Round of 16 second legs decided last Thursday, the final eight will be gearing up for the first leg of the quarter-finals on 13 April. Punters will be looking at the Round of 16 results to identify contenders most likely to make the final.

Five teams came through the RO16 without losing a match, although German club Schalke 04 was the only side to squeak through without winning one. The Gelsenkirchen team drew 1-1 at home against regional rivals Monchengladbach in the first leg, and their second leg also ended in a draw, at 2-2. With more away goals, however, Schalke went through.

Spanish side Celta de Vigo has a lot of punters supporting them, after winning both their legs against Russian team Krasnodar: 2-1 and 2-0. Vigo will now face Belgium’s Genk, who beat local rivals Gent 5-2 in the first leg, and finished 1-1 in the home rematch.

Anderlecht is the best-performing of the Belgian teams so far, winning their first leg against Apoel Nicosia 1-0 in Cyprus, then repeating that scoreline at home. Along with Vigo, they are the only team to take wins in both legs of the RO16.

Manchester United and Lyon among the Rest

Anderlecht will play Manchester United in the quarter-finals. The tough English side drew 1-1 with FC Rostov in Russia, but came back at home to win the second leg 1-0.

Olympique Lyonnais, aka Lyon, got a shock in their RO16 second leg, after initially beating Roma 4-2 at home. In the return match, the tables were turned, and the Italians pulled off a 2-1 victory, putting Lyon through to the final eight by a single goal.

Turkey’s Besiktas will be Lyon’s quarter-finals opponents. The Istanbul side beat Greek rivals Olympiacos convincingly at home 4-1, following a 1-1 first-leg draw in Athens.

The remaining quarterfinalist is Dutch team Ajax, who came back from a 2-1 first-leg loss to Kobenhaven in Denmark. They won the return match in Amsterdam 2-0, also making the final eight by a single goal. They play Schalke in the quarter-finals.