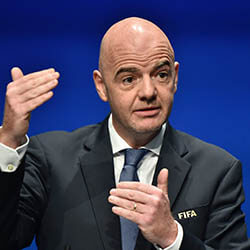 Stefan Keller, a Swiss special prosecutor appointed for the specific purpose of investigating a series of undocumented meetings between FIFA President Gianni Infantino and Swiss Attorney General Michael Lauber, has reportedly discovered clear indications of criminal conduct within the context of the mentioned meetings.

Lauber, appointed in the position of Swiss Attorney General in 2012, offered to resign from his post roughly two weeks ago after a Swiss court ruled that he had tried to cover up a covert meeting held with Infantino in June 2017. The court furthermore found that he had lied to supervisors and investigators regarding probes conducted into allegations of corruption brought against FIFA during that same year.

Lauber, now 54, is vehemently denying all allegations pertaining to his having lied about meetings held with Infantino.

FIFA has on its part pledged its full cooperation with the re-opened investigation, with Infantino having joined the organisation in its promise to assist authorities in investigating the “wrongdoings” of the past. Infantino now faces criminal charges based on special prosecutor Keller’s findings.

The entire drama revolves around a trilogy of meetings held between the now-resigned former Swiss AG and the FIFA president. Keller, who also serves as a regional court judge, has confirmed having unearthed certain elements indicating reprehensible behaviour. Possible infractions named by Keller include the abuse of public office, a breach of secrecy, the offering of assistance to (criminal) offenders, and being an accomplice and/or incitement to criminal activities.

If found guilty and convicted, Infantino could face spending up to an average of anywhere between 3 and 5 years per charge behind Swiss federal prison bars.