Gonzalo Higuain Gets A Double for Juventus 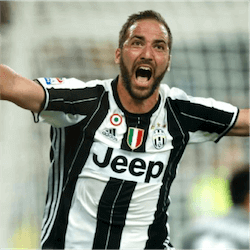 Gonzalo Higuain was the man of the moment this week, scoring two goals for Juventus in their Champions League match against Monaco. Juventus now have one foot in the Champions League final after pipping Monaco in the semi-final first leg. Both goals came from assists courtesy of Dani Alves who followed up on a sensational team move to give the Argentinian the perfect opportunity to find the back of the net just before the 30-minute mark.

Higuain slotted home his second just after the break to give Juventus a massive head-start on the final. Having scored a total of 31 goals this season, Higuan received a tremendous applause when he came off the field to be replaced by Juan Cuadrado. Once again, his clinical performance was key for the side and explains why Juventus paid 90 million euros to bring him across from Napoli in 2016.

Having won 13 straight matches at the Stade Louis II, Monaco were impressive all the way though the Champions League until they went up against the Italians. Monaco lost their focus and could not find a way through the Juventus defence. They will need to produce something special if they are going to make it to their first Champions League final appearance since 2004.

While Juventus may be feeling confident leaving the stadium, the semi-final second leg in Turin next week should be an interesting affair. To date, Juventus have never lost a European tie to a French team. Their performance at the Stade Louis II was so impressive, it is really hard to imagine Monaco being able to put one over the Italians at home.

Juventus coach Massimiliano Allegri raised a few eyebrows when he switched out his tried-and-tested back four defence ahead of the Monaco game. Instead, Allegri brought in Andrea Barzagli in an attempt to smother Monaco’s potent attack. The strange tactic paid off for the coach although the absence of Benjamin Mendy contributed did contribute to the efficacy of their approach.

After a slow start, Monaco did eventually warm into the game with Kylian Mbappe getting a chance to test Gianluigi Buffon keeping skills with a well-placed header off a Nabil Dirar cross. Around the 16-minute mark, Dirar raced down the right flank again teasing the ball to the near post. However, Buffon was on form again with superb save. Playing his 149th European game, Buffon is still considered one of the best goalkeepers in the world.