Juventus Through to Champions League Final 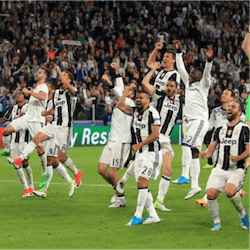 Italian club Juventus managed to book themselves a spot in the Champions League final thanks to the efforts of Dani Alves. The star forward inspired his team to a 2-1 victory over Monaco securing their second Champions League final appearance in three years. Alves was instrumental in setting up Mario Mandzukic’s opening goal in 33rd minute. Not to be outdone, Alves got onto the scoresheet himself with a brilliant volley on the stroke of half time.

The second half was virtually scoreless with Kylian Mbappe scoring a consolation goal for Monaco in the 69th minute. However, wasn’t enough to stop Juventus from sweeping to a 4-1 victory on aggregate on course for a clean treble. Massimiliano Allegri and his side are looking at a record sixth series A title this weekend at Roma.

Monaco needed to overturn a 2-0 first-leg deficit heading into the match. They came out, guns blazing, looking to shock the Italians and score an early goal. Juventus managed to survive the early onslaught as Mbappe booted a shot off the inside far post. It turned out the teenager offside, but when Radamel Falcao blasted a shot over the crossbar a few minutes later, it was clear that Juventus were in for a hard game.

Juventus managed to weather the storm before applying presser of their own midway thought the first half. It was Gonzalo Higuan who got the momentum going, chipping the ball over Danijel Subasic’s head only for Kamil Gilk to hook the ball away to safety. Subasic was also on hand to deny Mandzukick a well-timed header with peeled out wide.

The first goal came just after the half hour mark when a long throw by goalkeeper Gianluigi Buffon sparked a counter attack by Juventus. Alves picked up the ball, crossing to Mandzukic who headered it straight to Subasic but managed to slot home the rebound. With one in the bag, Juventus managed to double its numbers just before halftime.

A corner from Juventus forced Subasic to punch the ball clear only to find Alves who volleyed it straight into the back of the net from just outside the area. Monaco got their consolation goal from a corner when Joao Moutinho floated a beauty to Mbappe who fired it home from close range. In all likelihood, Juventus will be meeting up with Real Madrid in the final as they have a 3-0 lead in their second leg match.